Fugaso is a company which has been around for a long time, being established back in 2001. Its name is actually the short version for Future Gaming Solutions. It’s based in Limassol, Cyprus, and it’s a developer who has a variety of games available, from slot machines, to table games, cards, and quite a few of them have progressive jackpots. The company also has offices in the UK, Malta, Israel and Russia.

They currently have 79 games in total, the majority of which are video slots. One of the things I’ve noticed about them is that they’re embracing controversy, and they use it to their advantage. They’ve released several slot machines based on Donald Trump so far, using him as a caricature, including a recent one called Trump It Epicways.

Licensed in Malta, one of the best gaming jurisdictions from the player’s point of view, they make their games available to over three dozen countries, with hundreds of trusted online casinos hosting their titles. They’re present in over 60 casinos in the UK, 50+ in Ukraine, 70+ in Russia, over 100 in countries like Germany or Norway, and so on.

Fugaso was founded in 2001, and it’s a company which is based in Cyprus. The founder of the company is called Niko Mazger. They appear to have started releasing their own slot machines only in 2015, with Beauty Slot being their first one. It then took them more than 1 year to launch the next ones, with titles like Crazy 88 and Book of Tattoo following.

They managed to get these games into various gaming platforms and casinos, by partnering with big names of the industry, such as SoftSwiss, EveryMatrix or Patagonia Entertainment. It’s a big reason why they’re so easy to find at casinos right now.

Fugaso is producing games using HTML5 technology, the one that you’re going to find at all casinos these days. Since they don’t have a very long history in the industry, all their games are built using this platform, and they’re still considered modern. You can play them on a desktop PC, and just as easily switch to a mobile device on all platforms next.

They have a collection of 79 casino games right now, with 73 of these being video slots, 4 card games and 2 variants of roulette. With excellent graphics, unique themes and plenty of good features as well, I’ve found them to be above average in this industry.

As I mentioned above, they don’t shy away from controversial topics. They have an entire series dedicated to Donald Trump (Trump It, in regular, Deluxe and Epicways versions), and there are also slots like Shake It, Resident 3D, or Stoned Joker 5. I love that they have these hilarious themes as well, though you will still find a wide variety of Ancient Egypt, mafia, ocean or animal-themed slots, same as what everyone else gives you.

If you’re looking to get paid very well, that’s certainly a possibility in their slots, mostly in the ones with medium or high volatility though. One of their more notable recent releases, Trump It Deluxe Epicways, has a 50,000x jackpot, to give you one example of what’s possible. 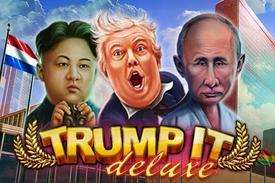 One of their popular slot machines over the last couple of years, Trump It Deluxe is actually the second game they’ve released in the series. You see Donald Trump acting as a bit of a clown in this one, facing two other leaders, of North Korea and Russia.

Not only is it easily accessible, due to its low-medium volatility, but it has an above-average RTP as well, of 96.89%. The 5 reels of Trump It Deluxe will host 30 active lines. From regular or random wilds to expanding symbols, free spins scatter, and multipliers, it’s a very long list of features, which adds to this slot’s long-term prospects. 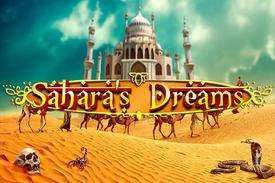 Another one that appears to have gotten a bit of attention is one of their earlier slots, called Sahara’s Dreams. This one has high volatility, and it features 10 lines on 5 reels. The inspiration has been borrowed from Aladdin and the Magic Lamp legend, and naturally, we see a variety of Arabic style symbols on those reels. A 5,000x the stake jackpot is the best possible outcome, using just regular top paying symbols to form combinations on all lines.

As you might’ve guessed, this one is also a bit of a clone based on the Book of Ra franchise. You’re going to get free spins with randomly selected special symbols, which have the ability to expand. You don’t get the typical Egyptian theme that every other clone seems to be using on the upside. 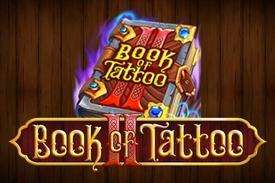 Using 5 reels & 243 ways to win, Book of Tattoo 2 is a slot which received more attention from the developer, and in fact, this 2019 sequel is an update for a game which originally came out in 2016. One of the things that set it apart is the presence of a progressive jackpot inside. It’s a big part of its RTP, 4.5%, while the slot itself adds another 92%, for a total of 96.50%.

It’s not the type to deliver huge wins on its own, unfortunately, and you can blame that on its jackpot. Though it has high volatility, its regular wins only go up to 200x the stake. However, if you do like going after progressive jackpots, this one is a good choice.

I like where Fugaso is going, and what they managed to achieve in just 5-6 years since their first release of a slot machine. With high-quality graphics, progressive jackpots in more than a few titles, some cool features, and several unique stories, there is a lot for a player to explore in their collection.