Pro Poker Player Under Fire for Betting on Coronavirus Deaths 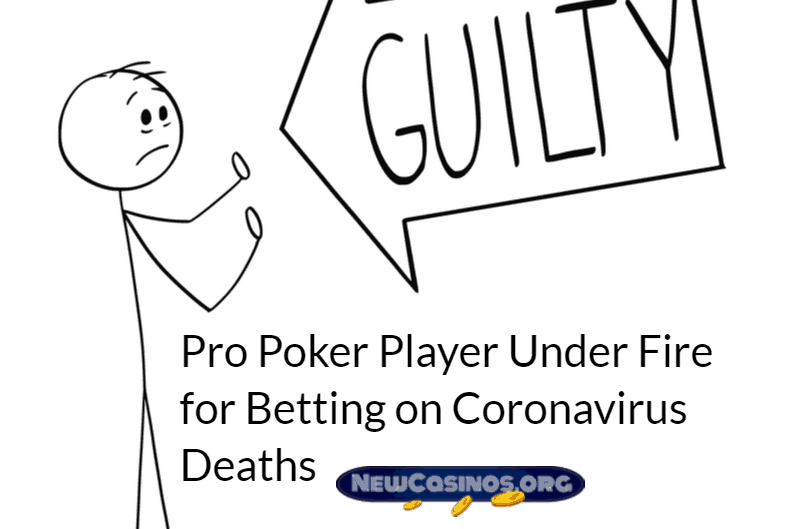 As we outlined in the last blog, we published, your time spent at an online bookmaker during the COVID-19 pandemic might be a frustrating one at the moment. The sporting world is one that has been completely devastated, with ALL major events – including the 2020 Olympic Games in Tokyo – being cancelled.

If you are a betting person though and you don’t want to bet at new online casinos, then there is perhaps plenty still you can wager upon – a reality TV show, the next president of the United States (let us all pray that it is Donald Trump again, and not Joe Biden who doesn’t even remember his own name ) or the number of people who will eventually die of COVID-19.

Surely no one would be ‘sick’ enough to bet on the number of COVID-19-related deaths?

Well, unbelievably somebody has, and it’s not just ‘somebody’, but professional poker player Chris Hunichen. There is, however, a little more to this bet that the banner headline.

Unless you’re a regular frequenter of USA online casinos and USA poker rooms and tournaments, you might not have heard of Chris Hunichen. Even in pro poker circles, he is not the most well-known name, but he can look back on career earnings over $8 million. He has won several tournaments in his lifetime, his last win being the European Poker Tour Barcelona event in August 2019, in which he took home the first prize of over $900,000. Chris is also the number one ranked all-time pro poker player in the state of North Carolina.

On the 4th of April Hunichen – @BigHuni on Twitter – sent out the following tweet to his many followers:

“Want to take over 100k deaths from covid-19 in the US by September 1st. Must know you or if I don’t, you must post or escrow.”

In short, Hunichen would take on anyone willing to bet against the number of US deaths from COVID-19 reaching 100,000 by the first of September. If that figure surpasses 100,000, then you would have to pay him. If it didn’t, then he would have to pay you.

Reactions to the bet were swift:

“that is the most disgusting bet I have ever seen in my life” – @scott4h.

“Dude what the hell is wrong with you, surely u can see that is not something to gamble on” – @Benphilipps.

“Chris I have always liked you but take this down ASAP it is not ok in so many ways. Know the lockdown will be mentally trying on people, and not enough people are addressing this side effect hope that’s what this is.” – @danile_shak

The chances of Hunichen winning his bet – sadly – look eminently reasonable. By the middle of April, over 25,000 people had died of COVID-10 in the US already, and the current rate was more than 1,000 per day. If that rate continues, then the number of COVID-19-related deaths will reach 100,000 by the end of June – well above Hunichen’s prediction.

Hundreds of people were quick to condemn Hunichen’s bet, but – as with most things in life – there are two sides to every story.

Hunichen has asthma, which puts him in one of the major ‘high risk’ groups, even though he is only 35 years of age. While COVID-19 itself is not fatal, it can make a lot of other health conditions a lot worse, especially conditions that affect the respiratory system … such as asthma. In short, if Hunichen does fall victim to the COVID-19 coronavirus, then it is likely that he himself will number among that amount of fatalities.

Despite the lockdown conditions in the US, many people are not taking the threat of the virus seriously at all – especially people under the age of 50. While the elderly are the people most at risk from the threat of COVID-19, dozens of young people have been killed by the effects of the virus, including a five-year-old girl in the UK.

Hunichen says that he made his bet to raise awareness of the possibility of the coronavirus killing those who consider themselves to be immune. As he has stated countless times from the fall-out that his wager has caused, it’s a bet he (a) thoroughly hopes to lose and (b) hopes to be around to pay out on.

“Every day, I would see some article where some 30-year-old or 35-year-old dies from this stuff,” said Hunichen. “Honestly, I’m terrified. If I get it, I feel like that’s going to be me.”

Hunichen is currently isolating in his Nevada home with his wife and two children. He felt constantly sickened by the attitude shown by many towards the virus, including one friend who sent him a conspiracy theory stating that the rich were spreading the virus on purpose so that markets would tank and the rich would get richer.

Disgusted with this attitude, Hunichen sent his tweet. If America wasn’t taking the virus seriously, then why not treat it as something you can just bet upon, like a Monday Night Football game or the winners of your next local college football teams’ game?

Some people did get it (kind of):

“I know the man; I see it: Florida, Texas, Louisiana and other states. To make money and bet others on o/u deaths is crazy man. This is not a way to unite.” – @RonnieBardah

“Am I the only one that sees nothing wrong with this bet? Now if he were actively rooting for people to die and goat ppl into wagering that’s one thing, but this is for that.” – @atxxpkrgolf.

“If I just wanted to profit off death, I would have taken the over-50K by the end of the year. That’s a much better bet.” Said Hunichen. “That wasn’t what I was trying to do here. I was trying to raise awareness. This is really a bad problem and, if people aren’t going to stay home and take it seriously, it’s only going to get worse.”