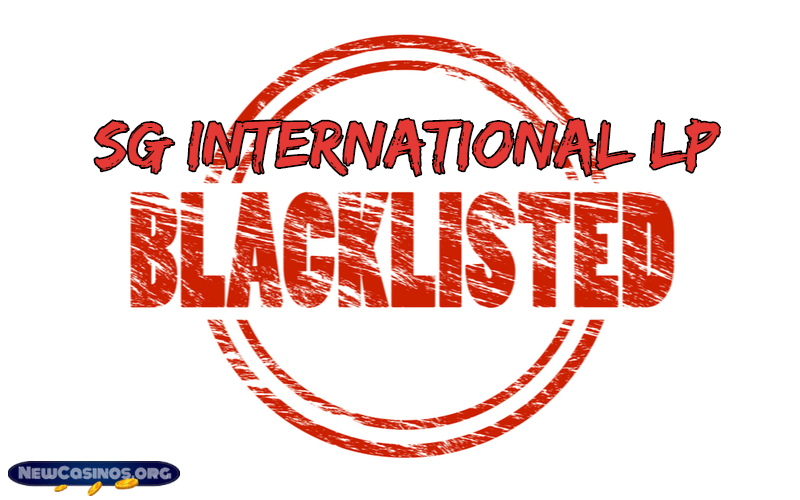 The operator that has been added to our blacklist casinos is a group of casinos by SG International LP, a company that is based in Edinburgh in the UK but is run by an individual named Inga Sharmina from an address in Russia. Not only does SG international LP run the casino that we here at NewCasinos.org have had issues with – Casoo Casino – they run several other online casinos as well. The full list is as follows:

We, of course, recommend that you do not play at any of these online casinos, and advise anyone that you know that they shouldn’t play there either.

We have run into problems with Casoo and Tsars Casino in not settling the invoices that we have sent them and not paying the money they owe our business. They have even gone as far as making fraudulent claims that we have created fake accounts to ‘steal’ from them! Nothing could be further from the truth as we are running perfectly well as a business and have no need to resort to dishonesty. We have many happy and beneficial relationships with our clients, and we really have absolutely no requirement to act with anything less than complete honesty.

Like many ‘rogue’ casinos, Casoo operates with a licence by Curaçao eGaming authority – the oddly named Antillephone NV 8048/JAZ. However, all is not as it seems. 8048/JAZ is a master licence that has been purchased from an unnamed company. Online casino operators can then buy sub-licences from the main licence, which means that they met their legal obligation – they need a licence to offer online gambling, and they have one.

Unfortunately, having a sub-licence is merely a means of allowing an online casino to do what they do legally. When it comes to the standards needed to maintain the licence, a sub-licence has no standards of behaviour – the casino can do what it likes (unless it is criminal) with zero comebacks.

Compare that to other major licensing authorities such as those in the UK, Alderney, Gibraltar and Malta. The licences that are given out are reviewed regularly. If a licence holder is not adhering to the standards of the licence, then they could be fined, have their licence suspended or even withdrawn completely. Several UK online casinos with UKGC licences have been heavily fined for failing to meet licence criteria, especially when it comes to issues such as player protection and money laundering.

Any holder of an 8048/JAZ licence does not have to worry about such matters. Because they have bought their licence, they largely have free reign to do what they want without proper regulation.

The company behind the 8048/JAZ licence probably sells white label casino skins. This means that any company can approach them and purchase a fully working, licensed online casino – they only have to add their own graphics and theme, then supply hosting and bandwidth to allow players to play at them.

Playing at casinos with an 8048/JAZ licence or a similar licensing set up is a risk. In 2009 there was an infamous case involving Joyland Casino, a casino with a similar ‘purchased’ licence. A player there won CA$4,188,719 playing the Playtech’s Beach Life progressive slot. Buried deep within the T&Cs of Joyland Casino was a clause that meant the casino was only legally obliged to pay a maximum of $9,000 per month in winnings. This would mean that the player would not receive the full payout for nearly forty years!

In the end, the casino offer to pay half the amount to the play as a lump sum as opposed to $9,000 per month over forty years … but, progressive jackpots are paid by the software provider of the slot in question (in this case, Playtech) and not the online casino. Playtech paid the owner of Joyland (cPays) the full amount, and then they only paid the player half. Where did the other CA£2 million go? Not long after this event, Joyland was sold to the William Hill Group.

Anyhow, back to our issues with SG International. Leading casino evaluation and review site ThePogg.com also has a list of SG international casinos. Here is the list and what ThePogg thinks of them:

Player complaints against Casoo Casino are almost a weekly occurrence. One player from Germany opened an account with Casoo Casino and made €5,000 in deposits. He later learnt that because of Casoo Casino’s feeble licensing, his registration (as a resident of Germany) should never be accepted. He asked for his deposits to be returned – Casoo Casino blocked his account and refused to return his deposits.

There are plenty of places to play online slots and casino games enjoyable and responsibly, and you cannot list any site run by SG International LP among them. At NewCasinos.org we recommended that you stay clear of any site run by this nefarious company.