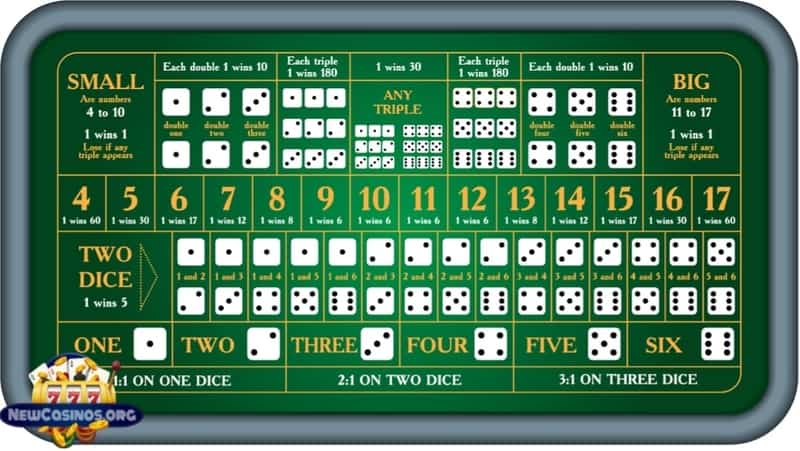 Sic Bo is basically a dice game where players bet on the result before each rolls. A rather complex system of winning combinations can give the player some great odds, up to 180:1. So that the players do not get lost in the complexity of the bets, it is played on a specially designed tabletop. The 50 possible bets and the payouts for those bets are written on that tabletop. Although it is a game of luck, it can bring players great wins. Discussing the history of Sic Bo, let’s begin with its origins.

Long before the paper and playing cards were invented, the Chinese enjoyed playing dice games – Sic Bo. You may also find it as Dai Siu, Tai Sai, Hi-Lo, Small and Big etc. The worldwide accepted name, Sic Bo, literally means “a pair of dice”, meaning although today it is played with three dice, Chinese used to play it with two. Nevertheless, in the past, it involved bricks with numbered sides which were tossed. The bets involved guessing what combination of numbers will be rolled and what the outcome will be.

Towards the end of the 19th century, manual labourers from China who were employed to build the transcontinental railroad took with them their ancient game. At first, it was strictly played among the immigrants, and after the new immigration waves in the 1920s and 1940s, non-Oriental gamblers finally discovered it.

As they would have to use a box or a “cage” to mix up the dice, Americans from different places changed the Sic Bo’s name into a “Birdcage” or “Chuck-a-Luck”. But as Chinese were persistent and stood by their game and heritage, they managed to keep its original form and the name Sic Bo managed to survive.

The Thriving of Sic Bo

The game’s popularity kept spreading and arrived in Macau, as well, in 1867. Almost a century later, STDM and Stanley Ho took over the concession of the monopoly in Macau. 10 years later, they opened a luxurious casino called the Hotel Lisboa. This is when they put Sic Bo on the main scene, the main casino floor, hand in hand with the classic casino games like Baccarat and Roulette.

But still, Sic Bo didn’t reach the peak of its success until the 1990s, when it first arrived in Nevada. This is when Sic Bo appeared in the main pits all over the Las Vegas Strip and became a huge hit not only among Chinese but among all sorts of visitors as well.

Today, besides in land-based casinos around the globe, you can find Sic Bo or some of its variants in any online casino. In fact, with the creation of online casinos, Sic Bo caught its biggest break. Although it was popular in Asia and America, Europeans were not introduced to Sic Bo until the online version appeared. Now, online Sic Bo games use a Random Number Generator to simulate the rolls, but the basics are still the same.