The 3 Craziest Sporting Bets of All Times 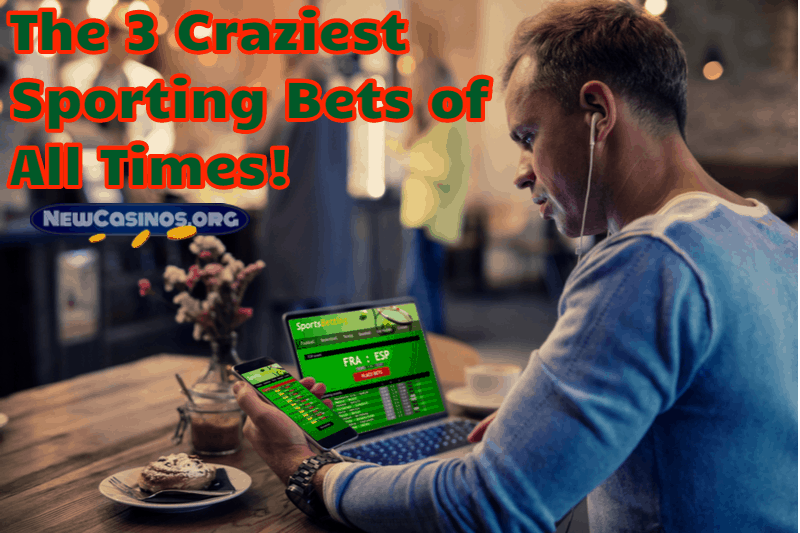 It’s safe to say that the COVID-19 virus has devastated a lot of people’s lives, and has disrupted everyone’s in one form or another. In some countries, you have barely even been able to leave your own home for a few weeks now, and even if you could, there’s very little for you to do anyhow, which countless events being cancelled in all walks of life.

The impact on the global sporting calendar has been nothing short of catastrophic. So many major events have been cancelled or postponed it’s an experience for all of that is unlike anything the world has seen since the Second World War. The Olympics, the golfing world’s Majors and the Wimbledon Lawn Tennis championships have all fallen victim to COVID-19, and major leagues like the EPL in football and MLB (baseball) have all been suspended.

Of course, if you like to test your sporting expertise by placing bets at an online bookmaker, then you have been stymied of late, with very little to bet upon. If you head to a sports betting site such as Bet365, you’ll find the number of markets available to you has shrunk considerably.

There’s light at the end of the tunnel through – a vaccine protecting against COVID-19 is currently at the clinical trial stage and all being well life will eventually get back to normal, or at least a new time of normal. The world of sports (or sports if you’re from the USA) will be back, and so will the aspect of sports betting.

Until then, and in an attempt to keep your entertainment a little, here are 3 of the craziest bets on sports ever made.

A Wisconsin couple makes a bizarre bet … and the winner ends up under arrest.

It’s tough being in a couple when you and your spouse support rival sporting teams. Despite being a Chicago Bears (American Football) fan, John Grant still agreed to marry his girlfriend Nicole who supported bitter rivals Green Bay Packers.

While watching a Monday Night Football contest in 2013 at a bar in Mayville, Wisconsin, between their two sides, the couple made a bizarre bet – the spouse whose team won the contact could taser the other for three seconds. The Bears won, and indeed John tasered his better half … several times as it happens.

Nicole did not turn out to be a good loser, though. She was so incensed that her life partner had carried through with the bet that she called the police. Initially, she claimed that she had not given John permission to taser her. Still, phone video footage shot outside the bar showed her waiting to be tasered – and even laughing about it … all she changed her tune once the first tasering had been administered.

Unfortunately for John, his troubles did not end there – indeed they had barely begun. It was illegal to own a taser in the state of Wisconsin, and so he was charged. The misdemeanour carried a potential sentence of a $10,000 fine, up to six years imprisonment, or both.

In the end, John was fined just $250 for ‘disorderly conduct’ after agreeing to give up his collection of tasers. It is not known as to whether John was also forced to give up his marriage.

British man spots a young driving talent and makes himself a tidy sum.

Richard Hopkins’ son had visions of being a future motor racing driving. Being the nice dad that he was, Richard would drive his son up and down the country so the boy, who was called Evan, could take part in go-kart racing.

Hopkins junior was a decent driver, but during one contest when thirteen years old, he found himself being absolutely hammered. Hopkins senior was so impressed by one other young driver that he asked the name of the boy who kept leaving his own son and all the other teenage racers for dust. “Lewis Hamilton” came back the reply.

It is not known what becomes of Richard’s son’s racing career.

A roofing contractor from Staffordshire completes the craziest Acca of all time.

If you are into your sports betting, then no doubt you will know what an ACCA is. It’s short for an Accumulator – a string of single bets that are placed at the same time to increase the odds of the overall bet. The only problem with an Acca is that all the events you bet upon have to be winners else the entire bet becomes a losing one.

Michael Gibbs, a roofer from Staffordshire, decided to predict the winners of all the major European football leagues for the 2000-01 season – all thirteen of them. He threw in the winners of the County Championship (Cricket) and the Premiership (Rugby Union) too. The combined odds … let’s just they were pretty staggering. Last of the big bettors, Mick was willing to risk £0.30 on his bet.

Staggeringly, fourteen of the fifteen bets came in leaving just one to be settled – the UEFA Champions League. Mick had backed Bayern Munich who’d reached the final where they were to play Valencia. It took a marathon penalty shoot-out to decide the game. When future Southampton manager Mauricio Pellegrino saw his penalty saved by Bayern’s Oliver Kahn, Mick’s bet had come in, and he found himself £500,000 richer.