The First Casino in the World? 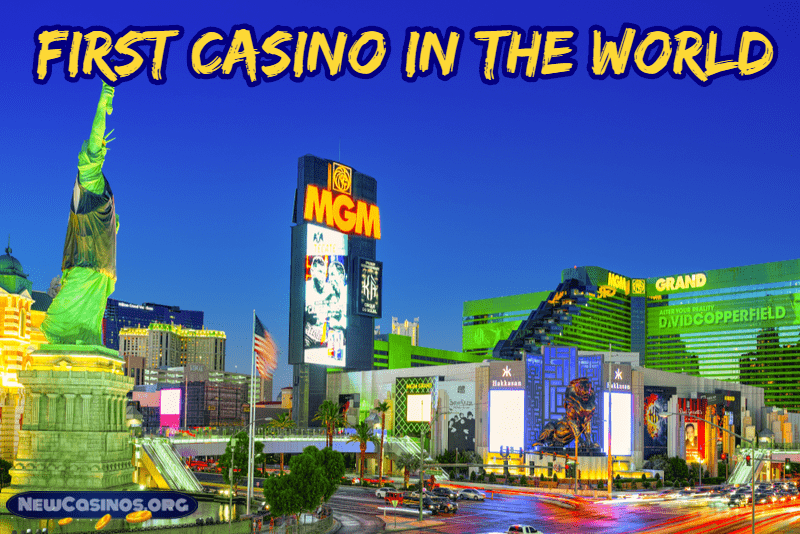 Gambling games have been around for centuries. Indeed, the first evidence for gambling goes back an amazing 4,000 years. Tokens have been discovered in China that are thought to have been used in some kind of lottery-style game. These tokens have been dated all the way back to 2,300BC. There is also written evidence that lotteries were used in China to fund immense works of construction, including perhaps the Great Wall of China.

While games of chance have certainly been around for a great deal of time, ‘gambling houses’ have not been part of the human gambling world for quite so long. People would play gambling games with each other in their homes or at meeting places, usually, ones where alcohol was served too. There was nowhere anyone could go solo or with friends to place bets or wagers on games provided by dedicated gambling merchants.

That all changed though in the early 1600s in Europe. Gambling houses began to spring up all over Italy so that people could play gambling card games, in particular, early forms of baccarat and the ‘don’t go over 21’ card game that eventually would become blackjack.

The casino that is now officially recognised as the oldest casino in the world – the Casino di Venezia – first opened its doors way back in 1638. When it was opened it was known as the ‘Ca’ Vendramin Calergi’ and was located on the Grand Canal in Venice. Such was the reputation built up by this gambling house that rich people from all over Europe would venture to Venice just to play there.

Interestingly, it is assumed that the word ‘casino’ is derived from the Italian word ‘casa’ which means ‘house’ – so literally ‘casino’ means ‘little house’. It wasn’t really until the 1800s that gambling houses began universally to be known as casinos. Until then the word ‘casino’ could be used for any small venue where some form of entertainment takes place. Since the 1850s though it has only been used for places where gambling games are offered, and indeed when you are playing at a casino you are playing against the ‘house’ – or of course ‘casa’ in Italian.

This first official gambling house was not the invention of some expert entrepreneur who’d worked out that if gambling games were offered to the public in which the house maintained an edge, then the house would always come out on top (a rule which stands as true to this day). Each year in the spring in Venice a carnival would be held. This carnival would attract visitors from all over Italy and many from the rest of Europe. Because of this, several smaller gambling houses would spring up so that people could gamble – however, because such houses were unregulated and money was changing hands, violence often erupted when people worked out they’d lost all their cash, or when losing parties would refuse to payout. The officials of Venice did not want gambling to give their city a bad name, so they decided to offer regulated gambling services.

The Great Council of Venice took control of one wing of the Palazzo Dandolo (a hotel) near the Church of San Moise and declared it to be the ‘Il Ridotto’, which is Italian for ‘The Private Room’. They announced that they would be providing ‘games of chances’ at Il Ridotto and that wagering on any kind of game in Venice during the carnival season was now banned outside of the private room they had provided.

Il Ridotto was open to all members of the public, but the minimum stakes were so high that only those with hefty purses and wallets were able to play there. There was another ‘anti-commoner’ rule too – players had to play wearing three-cornered hats (as was the fashion with the Italian upper classes at the time) and – for privacy and not because of ‘COVID-19’ – wearing masks.

‘The Private Room’ offered two main games of chance. The first was called ‘biribi’ which was a lottery or keno style game. Players could choose any number from the seventy that were available. Once all bets had been placed, the ‘banker’ would draw a number from a bag and anyone who wagered on that number would win. The notion of the ‘house edge’ was already in practice though – a player had a 1 in 70 chance of winning but if they did win they would only receive 64 times the size of their wager.

Both games offered at Il Ridotto were pure gambling games – no skill required!

The other game of chance offered was a card game called Basetta, which was an eclectic mix of blackjack, poker and gin rummy. The rules of the game were fairly complicated and outside of gambling circles, it was not very popular. It soon began to lose popularity too at Il Ridotto as the house edge was thought too great. It was eventually superseded by faro, which was a French game in which players could bet on any one of thirteen playing card values, ace through to deuce. The banker would then deal a card from a normal deck, and all bets of that denomination would lose and be removed from the table. The next card would then be dealt and all bets of that denomination would win and winning players paid at odds of evens. All other bets would ride.

Il Ridotto became extremely popular and wealthy visitors to Venice would travel there just so that they could gamble. The fun did not last forever though – as is often the case the authorities attitudes to gambling changed and in 1774, Il Ridotto was closed down. Palazzo Dandolo is still open to this day though, and remains a hotel for those who can afford to stay there.