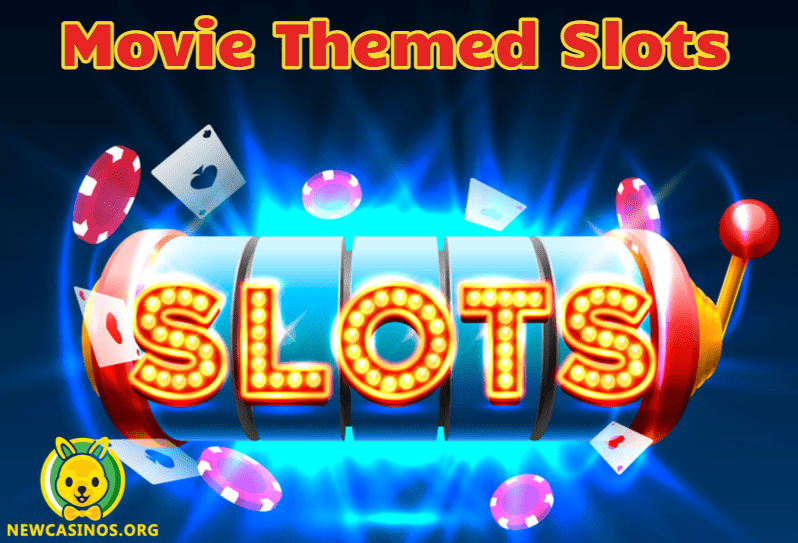 Movie-themed online slot games tend to be amongst the most popular slots found at online and mobile casinos. The familiarity of already known characters, the nostalgia of older movies and new releases all help to make movie-themed slots an entertaining gaming choice.

Looking for a new and more exciting game to enjoy? Do you have enough time in your hands? Why not spend the time reminiscing about all your favourite movies while playing your favourite game? Luckily, we have got you covered! We’ve handpicked and listed some of the best movie-themed slot titles just for you. Our list features some of the most modern slots, old movie slots, and some you might not expect on your list.

Nevertheless, why not try spinning the reels of these exciting slots and enjoy every second you spend playing at the casino. You might even find some of the biggest big-screen icons as you play the game. Ready to get going? Lights, Camera, Action! Let’s go!!

Rocky slot one of our all-time favourites, but it’s without a doubt one of the best games out there. This was the game that first brought Playtech into the limelight.

Even those who were too young to see the 1980s Rocky movies have heard of the iconic films with Sylvester Stallone in the starring role. Playtech’s Rocky slot game brings with it a nostalgic reminder of a great movie in which Rocky Balboa trains hard to reaching beyond what he thought he was capable of.

The slot game is played on five reels and three rows and comes with special features. When the free spins round is played, it comes with a 2x multiplier and extra wilds on the reels. The Knockout Bonus is triggered when the name ROCKY is spelt out across the slot reels.

2. The Phantom of the Opera

Microgaming brought back the popular protagonist from the celebrated Gaston Leroux story in a new “The Phantom of the Opera slot game”.

The Phantom of the Opera slot includes a wild symbol that substitutes all the other symbols with an exception of the Phantom Mask.

Phantom of the Opera has a rich history and is particularly popular as a play. The Microgaming slot is based on the 2004 movie of the same name. The slot game is played on five reels and has 243 ways to win.

There are a number of special features found in Phantom of the Opera. These include two free spins rounds, the random features Chandelier Bonus and Phantom’s Favor, along with a Masquerade Click and Pick feature, and Dancing Wilds.

The old Jurassic Park slot is one of the most popular casino games around, but the modern Jurassic World slot is definitely worth a try.

Who has not watched this iconic movie? This amazing Blockbuster sci-fi movie was stunning and no one could’ve acted the Terminator role better than Schwarzenegger.

This game is the first in the series of Superman Slots; the version is largely based on the iconic 1978 original with Gene Hackman and Christopher Reeve.

The slot is based on the most recent recreation of Superman, the game features Henry Cavil.

There is only one Highlander, but fortunately, this slot is not limited to a single winner.

Another outstanding Playtech creation, in this game you will enjoy a bumbling Clouseau find his way through to the diamond.

Since 1978, Michael Myers has over the years been scaring movie audiences. This is the only right that the Halloween franchise ultimately got their own slot game in 2017.

Immediately after the first release of the Green Lantern in the theatres, people started criticizing the production right away. But although the movie is somewhat not satisfactory. This slot machine created by Playtech boasts a wide range of possibilities that fully make up for any disappointments.

The Matrix is one of the most iconic sci-fi films of all time. It’s for this reason, it’s considered a great inspiration for this top-notch Playtech slot.

Grease is an important aspect in this classic slot film game largely based on the popular musical movie.

Working together with Universal Studios, NetEnt developed a video slot that is based on the 1930’s horror fiction film, The Invisible Man. This film slot machine has an amazing atmosphere with creepy music and dark graphics.

Hitman is an amazing five-reel and 15-payline slots game that was inspired by the award-winning movie Luc Besson. It’s one of the most popular slots titles.

Developed by Microgaming, HellBoy is a popular 20-payline-slot game. HellBoy features the renowned Hellboy character and wild multiplier, which is also the game’s logo.

One of the best games by Playtech, Ace Ventura is a great slot title that features five reels and 243 paylines. The popular film Ace Ventura Pet Detective inspires the game. It’s about a detective (Jim Carrey) who investigates the case of a dolphin that went missing.

Created by iSoftBet, Basic Instinct is an amazing 5 reels and 243-payline slots. The popular film released back in 1992 inspires the game. The progressive slot is set up against a popular club scene backdrop featuring Sharon Stone. The high-value symbols are released to the theme and appear stacked.

Released back in 2012, Bruce Lee slots are playable with $0.03 per spin. The game is considered as one of the most popular slots of all time. While the main character won’t be showcasing his amazing martial art skills, you can rest assured that you will enjoy the different types of Free Spins feature you will benefit from.

Cowboys and Aliens slot is a popular 5 reel and 9 paylines slots. In this slots game, you can’t adjust the overall number of paylines because they appear fixed. Created by Playtech, this amazing casino game is inspired by the fascinating novel published back in 2006. The novel was so successful that it was finally adapted for a movie in 2011 featuring popular actors like Harrison Ford and Daniel Craig.

Inspired by the movie with the same name that was released back in the ’80s, Platoon is a 30 paylines and 5 reels game developed by iSoftBet. The high paying symbols feature movie characters and props.

Rambo is a classic 5 reel and 720 paylines progressive slots developed by iSoftBet. With the free spins feature and four progressive jackpots, players can win a decent amount of money.

Released in 2018, Terminator Genisys is one of the best non-progressive video slots. With a payout of 95.75%, this slots game pays about 200x your overall stake in one game.

Launched back in 2018, Mask slot is a great game developed by NextGen Gaming. The game comprises 20 paylines and 5 reels with a payout rate of 96.525%.

Developed by Playtech, Top Gun slot is inspired by the popular film of the same name. It’s a 243 payline and 5 reel slots. Combined with fun music and bright graphics, this is an exciting game that you should play.

If you enjoyed watching any of these movies then you will enjoy playing these slots even more. Check out the great selection of slot games available at any of these top online casinos.