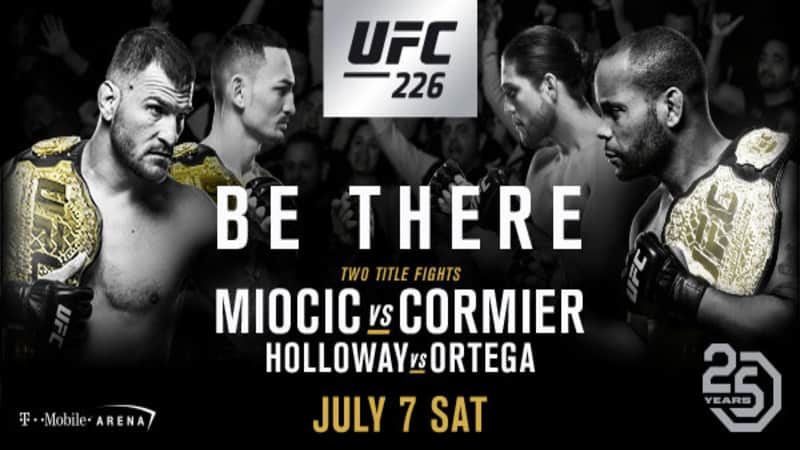 UFC 226 will take place this weekend at T-Mobile Arena in Las Vegas, Nevada. There is a ton of excitement and anticipation for this event, which features two championship bouts. UFC 226 is a 13 bout card, with five bouts to be featured on the main card. Below is a quick look at the betting odds for the main card bouts, and a prediction for each match.

The UFC 226 headline bout will feature Stipe Miocic vs. Daniel Cormier. This will be the first time in UFC history that the heavyweight champ (Miocic) will take on the lightweight champ (Cormier). Miocic is the betting favorite and is receiving -250 odds to retain his title. Challenger Cormier has been given +210 odds to upset Miocic and steal the heavyweight belt. This should be a very fun and exciting match, but in the end, Miocic is just too strong and powerful for Cormier. Bet Miocic -250 to defeat Cormier and retain his heavyweight belt.

The Ngannou vs. Lewis matchup is one of the more highly anticipated matchups on the main card. Ngannou is the clear favorite in this bout, but challenger Derrick Lewis has made plenty of comments in the media about Ngannou. Ngannou is the number 2 ranked heavyweight fighter, even after a tough bout against Miocic. Lewis might wish he should have kept his mouth shut, as Ngannou is a very solid fighter. Bet on Ngannou -365 to defeat Lewis and shut him up for awhile.

The Chiesa-Pettis matchup was added to the UFC 226 card after the original bout was cancelled back in May, due to the famous Conor McGregor incident. This appears to be one of better bouts of the whole day, and both of these are terrific fighters. Pettis is a former lightweight champion, but was defeated by submission in his last fight. Look for Chiesa to keep Pettis’ struggles going and get the victory. Bet Michael Chiesa -160 in this fight.

This is another bout that was added to the UFC 226 card after getting cancelled previously. Saki is just 1-1 in his MMA career, but is known for his tremendous skill in kickboxing. Rountree is 6-2 in his brief MMA career after competing in the show, Ultimate Fighter. This bout appears to have been added to the main card so fans can get a glimpse at these up and coming stars. Look for the kickboxing skills of Saki to help him win the match over Rountree. Bet Saki -147 in the opening bout of the main card portion of UFC 226.