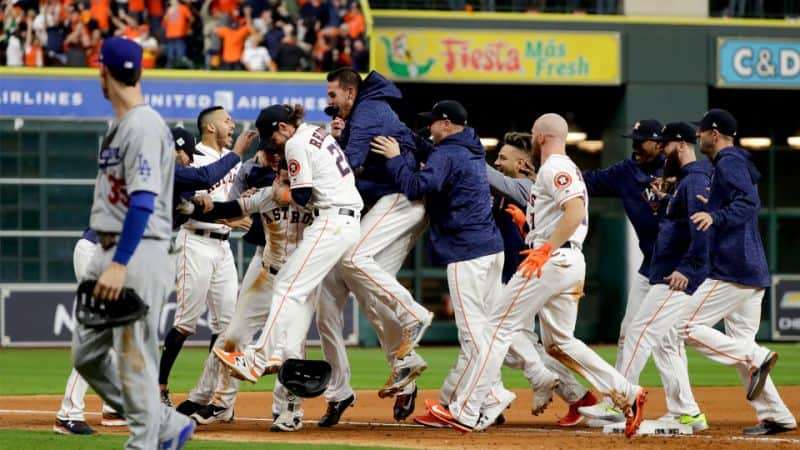 The 2018 Major League Baseball season is nearing the halfway point and playoff races are beginning to take shape in both leagues. Let’s take a look at the updated odds to win the 2018 World Series for the top eight teams.

The New York Yankees currently have the best record in baseball, and have the best odds to win the 2018 World Series. The Yankees have a very dangerous offense that is capable of scoring runs at any moment. New York continues to battle the Boston Red Sox for the AL East lead, but the Yankees will be very dangerous come playoff time.

The defending champion, Houston Astros, just recently had a 12 game win streak and now have taken control of the American League West. The Astros now have the second best odds to win the 2018 series, after opening as the early favorites. Houston has the best starting rotation in baseball, and their offense continues to score a ton of runs. The Astros have a great shot at becoming the first back to back champions since the Yankees in the year 2000.

The Boston Red Sox are in a tight battle with the New York Yankees in the AL East, but appear to be a lock to reach the 2018 playoffs. Boston has a lineup full of dynamic hitters that work counts and make life hard for opposing pitchers. If the Red Sox can keep up their dominant starting pitching, they have a great shot to win the American League pennant.

The Washington Nationals currently have the best odds to win the World Series as any team in the National League, but find themselves in third place in their division. The Nationals have yet to win a playoff series in franchise history, but came into 2018 with a loaded roster and great starting pitching. If the Nationals find a way to reach the playoffs, their starting pitching will be as good as any.

The Cubs just got swept in a four game series against the Cincinnati Reds, but they still have great odds to win the 2018 World Series. The Cubs have played in the last three National League Championship Series, and have the talent to get there again this season. Chicago must shore up their starting rotation if they are going to win the NL Central for a third straight year.

The Brewers lead the National League Central by two games at the moment, but were in the same position last season. Milwaukee appears to be much better this season, but they still have to prove that they can hold off the Chicago Cubs. Milwaukee doesn’t have a dominant starting rotation, but they feature perhaps the best bullpen in all of baseball. The Brewers will play a role in deciding who reaches the playoffs in the National League.

The Seattle Mariners have burst onto the scene in 2018, and appear to be a real threat in the American League. Seattle will be without Robinson Cano if they reach the playoffs, but their lineup has picked up the slack in his absence. The Mariners have a solid starting rotation, and James Paxton has proved to be one of baseball’s top pitchers.

The Los Angeles Dodgers have struggled with injuries in 2018, but they still have most of the same players who led them to the 2017 World Series. Clayton Kershaw is making his return to the rotation, and the Dodgers have plenty of weapons in their lineup. It would be foolish to count the Dodgers out.

There is a look at some of the betting favorites to win the 2018 World Series!