The Hotbeds of US Gambling 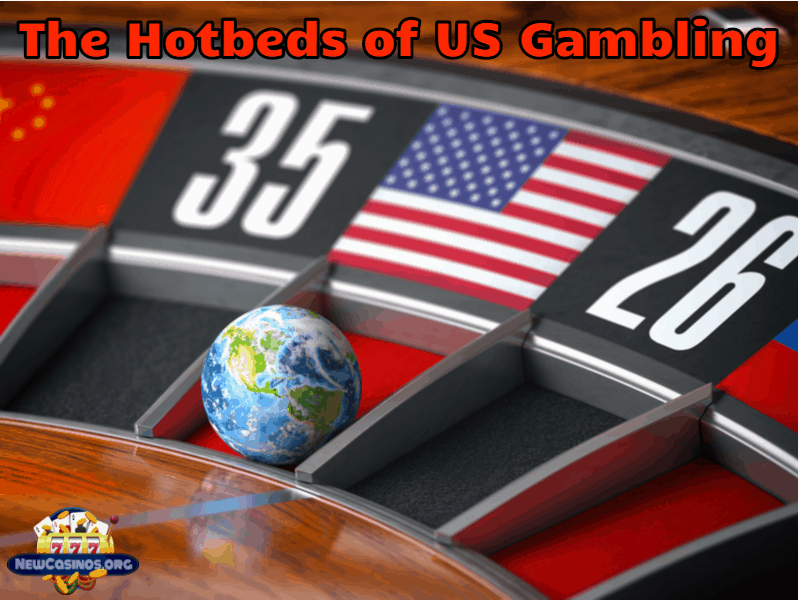 It’s hard to work out which of these parties has emerged victorious but one this is sure – it ain’t the gamblers, who want to gamble fairly and legally at USA online casinos.

The problems with US gambling can be traced back to the invention of professional sports and the improvement of telegraphic communications. When betting on pro sports was first allowed, bookmakers started to take bets. Eventually, they began to fall foul of those who had better communication systems than them and therefore could learn the result of a particular contest before the bookmakers had a chance to close the book. Eventually, the government stepped in and banned any gambling that involved bets being placed by telecommunications.

The online poker boom changed the face of online gambling in the United States.

The boom in online gambling in the early 1990s saw the next gambler v criminal v government tussle. Lots of people started making money gambling in a way that was (at the time) perfectly legal – by playing online poker. It soon became clear though that the government had something of a problem with this – mainly because they were put under pressure by Republican pressure groups and real-world casinos fearful of losing trade to this new and unregulated online arena.

In 2011 the US Federal Government decided that enough was enough. They decided that online communication fell under the same considerations as ‘wired communications’ and was therefore illegal. They went as far as commencing legal action against the three biggest poker rooms available online – PokerStars, Full Tilt Poker and Absolute Poker. After the usual court tussles a new law came into force on April 15, 2011 (a day dubbed ‘Black Friday’ by the poker community) that practically illegalised online poker in the US overnight.

The effect on the USA poker community and online casinos in the USA was devastating, as many top-rated poker players relied upon online poker for the entirety of their income. There were even rumours that one poker player had been so affected by the ban that he took his own life.

Move forwards to 2020, and the US’s relationship with online gambling has thawed … a little

As we mentioned earlier, unlike the governments in most other countries, the federal government considers one of its duties is to make money. Making as much cash as possible seems one of the fundamental cores of being American, which probably explains how a billionaire with no political experience – Donald Trump – can become the leader of the country.

The government has seen how other governments around the globe are making money from online gamblers and new online casinos and wants a piece of that action. Online gambling and operating an online bookmaker is now legal … but only in certain areas and each US state has its own set of laws and considerations as far as online gambling goes.

Here we take a look at some of the hotbeds of US gambling.

When it comes to online gambling in the US, the state of New Jersey must be considered the industry leaders … but only because they wish to prop up their ailing real-world casino empire. Atlantic City (the New Jersey version of Las Vegas) is nothing like it used to be, but a dozen or so real-world casinos are still going. The owners of these casinos have been allowed, legally, the grant licences to and run new USA casinos online enterprises.

Even most Americans don’t know where South Dakota is (it’s sandwiched between North Dakota and Nebraska in the mid-west), but it has become something of a key player in US gambling terms. South Dakota is most known for having several Native American reservations, and Native Americans are known for their love and aplomb when it comes to operating real-world casinos. It is only natural then that the governors of South Dakota are more than cool on the idea of gambling, and online casino games too.

This state has really had a total about-face when it comes to any form of gambling, as gambling was completely banned there before 2004. When this ban was rescinded in 2004 over a dozen casino sprang up overnight, most of them within Philadelphia. Such was the love that Philadelphia developed for gambling; it came as no surprise when the governors of the state changed the rules to allow online poker, casinos, sports betting and casinos.

Illinois is not famed for its amazing weather, so the people of the state usually find ways to enjoy themselves that does involve being out of doors. Gambling in the state has been permitted since the 1990s, and the state’s support for gambling has helped pave the way to it becoming something of a tourist attraction. You don’t need to visit to gamble online via Illinois though, as sports betting and lottery betting is already legal online, with casino gambling sure to follow.

It has taken a while, but the US attitude towards online gambling has finally thawed – in most states at least. Online gambling is likely never to become a legal entity in some states (we are looking at you, Utah). Still, in most areas, it will eventually become something that you are legally obliged to do  … but it may take a little time …