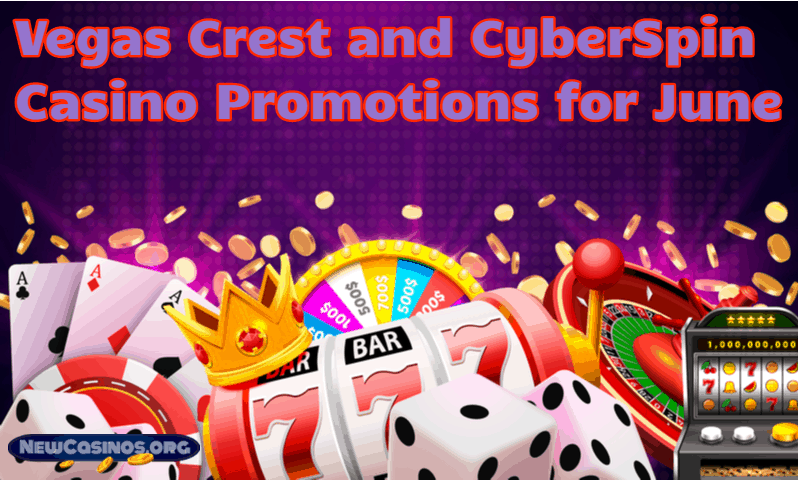 Summer is just starting up, and as we’re rolling into June, we found out about three excellent new promotions powered by Vista Gaming casinos, which, will be available at two top brands – Vegas Crest and CyberSpins.

We’re letting you know about them below so that you can activate them and take advantage of the offers. These are only available for June 2020, so in the next couple of weeks, and then they’re gone.

Make a Splash Slots Tournament: this one takes place at VegasCrest Casino, and it’s available every week, for the entire month of June. It’s taking place on Saturday’s, and it’s offering prizes of $1,125 each time. You get to play some cool slot machines, and maybe win bonuses and cash prizes as well, with decent odds to walk away happy, since the top 20 players will all get something out of it. The one in 1st place will get $400 cash, while the places 2 to 20 get casino bonuses.

CyberSpins Casino’s Jungle Party Slots: also a tournament, and with the same focus on slot machines, but this time it’s going to take place at CyberSpins casino. They’ve decided to run this tournament weekly, but only on Friday’s, for the entire month of June. The players finishing in the top 20 will split prizes of $1,275. 1st place gets $500 cash, while the other 19 players get anywhere from $10 to $250, in casino bonuses.

Players will be able to participate in this tournament by playing at one of the 17 slot machines which have a jungle vibe, such as African Sunset, Lion Explorer or Monkey Money, among others.

$1,000 Blackjack Tournament: we’re going back to VegasCrest Casino for this one, a tournament with prizes of $1,500 total, to be split among the top 20 players. As you can tell, the top player gets $1,000. It’s a blackjack tournament which takes place twice in June, with the first edition running between Friday 12th and Sunday 14th. The second one will take place two weeks later, from Friday 26th to Sunday 28th.

And, if you’re not familiar with the two casinos that are running these excellent promotions, we have a couple of details about them, below.

VegasCrest Casino offers more than 1,000 games, the majority of which being slot machines. Among many other providers, they offer slot machines from Betsoft Gaming, Rival Gaming or Saucify, to mention a few that they focus on. The casino has both a large collection of slot machines and a significant number of table games, among which you will find Blackjack, Texas Holdem, Baccarat and Roulette, with a couple of variants for each one. They pride themselves with their fast payouts and with the customer service, which is available 24/7.

CyberSpins Casino is run by Vista Gaming, same as VegasCrest, a well known and reputable company in the online gaming space. It’s one of the few USA casinos available for players based in the United States of America, with more than 500 titles, split between the usual slot machines, table games, bingo, and more.

How to Take Part

Want to make sure that you’re taking place in these tournaments, and you don’t miss out? Make sure you meet the minimum requirements, and that you’re playing the games which are included in these promotions.

Make a Splash requires that you play one of the 21 games listed on the page of the promotion, all of the sea themed. As long as it’s eligible, and the spin occurs between 6:01 AM Saturday and 5:59 AM Sunday, you will take part in the tournament. You also need to have made at least one deposit within the previous 7 days.

Jungle Party is the same, with a list of 17 jungle-themed games available on the promotion page, and with a different day when the tournament takes place (from 6:01 AM CEST on Friday to 5:59 AM CEST on Saturday). Play one of the supported games within that time frame, and you will be automatically entered into the competition.

The Blackjack Tournament, taking place at Vegas Crest, will allow players to compete at one of 10 different variants of Blackjack, all listed on the promotion’s page.

For the two slot tournaments, from both Vegas Crest and CyberSpins, the requirement to win is the same. Taking part is one thing, but actually getting the first prize, or being within the top 20, requires that you have the best win from a single round. You could play just one spin, and you could win the tournament, provided that you got the best prize (equalized, so it’s as a multiple of the stake used, not the actual amount won).

In the case of the Blackjack Tournament, you’re going to need to have the best-equalized win, over a set of 5 rounds. You need to play within the hours where the tournament is active, and within the previous 7 days, you need to have at least one deposit made.