What Are The Worst Casino Games You Can Play? 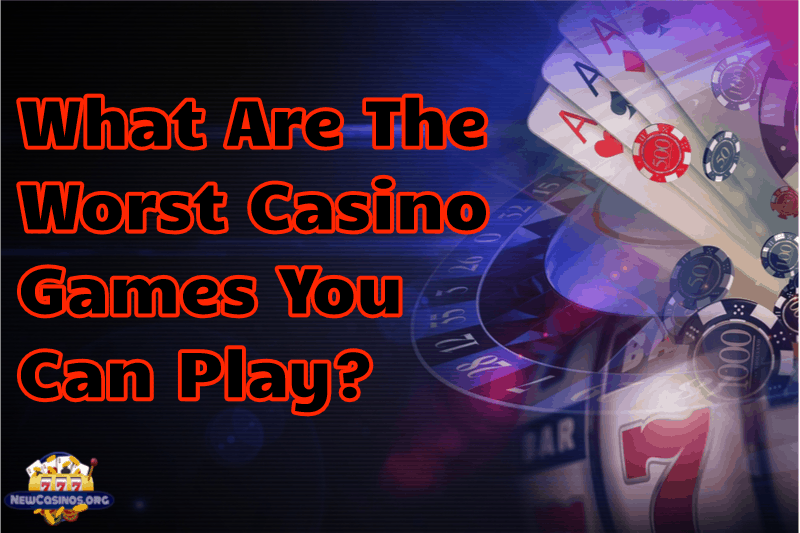 Time after time, you see lists at sites such as NewCasinos.org which bang on and on about the best games that you can play. They list the best slots, or the best casino table games, or the best bonuses … it’s all about ‘the best’!

But what about the other side of the coin? What about the worst experiences in the casino realm? What games should you avoid like the coronavirus?

Here is a run-down of some of the worst casino games that you can waste your money on if you are dumb enough!

Blackjack is a fine game on its own – changes do not have to make to make it more interesting, yet some versions of blackjack offer ‘side bets’ which are nothing more than allures to get players to part with more of their money.

One of the worst side bets in blackjack is also the most common – insurance. If you are offered insurance in blackjack, never take it.

Just avoid side bets in blackjack – that’s the golden rule!

Red Dog is a card game that used to be played at real-world casinos but is seldom seen now. You can still find it at many online casinos, though. It’s based on an ancient card game called Yablon.

To play, after placing a bet player is dealt two cards face up. If they are consecutive (such as 4/5 or J/Q), then the hand is a push, and the bet is returned. If they are a match, then a third card is dealt. If the new card is the same value then the players win at 11:1, else their bet is returned.

In all other circumstances, the ‘spread’ is announced, and a player may double their initial bet. The spread is the number of cards ‘between’ the two dealt. For example, if the cards are a 7 and a 10, then there is a two-card spread (8 and 9). A third card is dealt, and if it falls within the spread (in our example, is an 8 or a 9), then the player wins. The tighter the spread, the higher the payout.

Red Dog could be an interesting game to play, but here’s the rub – casinos play with as few decks as possible to tighten the house edge. As a result, the game’s RTP is not really good enough for you to play for any length of time and hope to come out on top.

Sic Bo ought to be an entertaining game to play, and it is trendy in Asian casinos (but not so much in US online casinos and real-world casinos) but it’s a game you should avoid as the odds are quite heavily stacked against you.

For example, take the example of the Small/Big bet. The game is played with three dice, which are rolled by the dealer (or more usually there is a device where the three dice are shaken automatically). One bet you can make is ‘Small’, which wins if the total is between four and ten. The opposite bet is ‘Big’ which covers eleven to 17.

Sic Bo is full of ‘sneaky’ little rules that tip the edge from the player to the casino, so if you love dice games, you should play craps as opposed to Sic Bo.

If there is a push (you are both dealt the same value card) then you have to double your stake for new cards to be dealt, else you lose. You may find a version of War with a side bet, but even with that, this game is about as exciting as watching TV when the TV is switched off. The house edge is lousy too, and it’s just a dull game. Play blackjack instead.

If you want to throw away your money completely, then the best thing you can do is pump it into the kind of solo slot machine or pokie that you see in pubs, betting shops or other similar establishments. These machines are designed to draw you in and hook you with their flashing lights, bells, whistles and soundbites.

Your chances of coming out on top are so low you’d better off giving your money to charity. The RTP of such games can be as low as 75%, which is absolutely ridiculous when you think online slots can have RTPs as high as 95%.

You really need to avoid pub slot machines altogether and stick to online pokies instead!