When Online Casinos Refuse to Pay Out 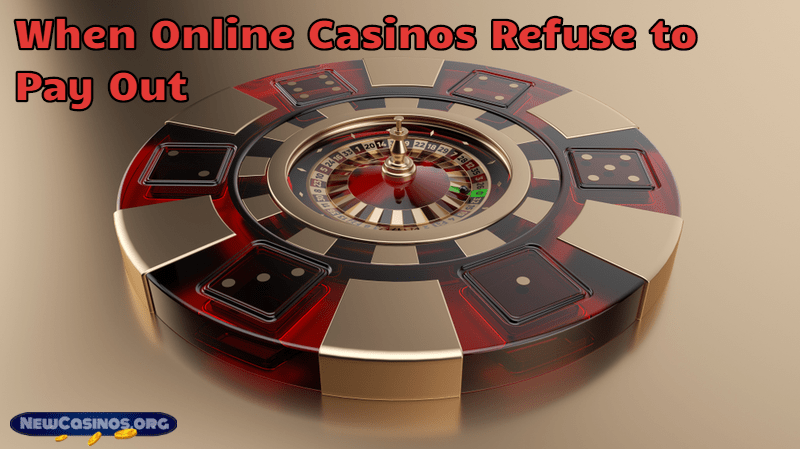 It’s every online casino player’s dream to win that massive, life-changing jackpot. Imagine if, with one spin of the reels, that you land a combo which earns you a seven-figure sum. Once you have gotten over the shock and those dollar signs have fallen from your eyes, you can imagine how your life is going to change and, if you’re the generous type, how the lives of your friends and family are going to change too.

Of course, there’s a flip-side to every coin. Imagine winning that massive, life-changing jackpot. Imagine the online casino where you won it, celebrating your good fortune with you. Imagine those few days of tension as you wait for the money to get to you … and then imagine being told that the online casino has decided that they are not going to pay you.

What. A. Nightmare. This is precisely what has happened to UK online casino player Andrew Green from Washingborough in Lincolnshire.

Andrew Green’s $1.7 million wins were not at some ‘dodgy’ casino!

Before we go any further, you have probably heard of ‘dodgy’ online casinos not paying out big wins, finding ridiculous excuses to prevent players from getting the money they have rightfully won. Typically though such online casinos are tiny, even one-person companies with licensing that’s as worthless as the joke in a Christmas cracker. The online casino, in this case, is not ‘dodgy’, or has worthless licensing – it’s the multi-million betting company Betfred, and is licensed by the United Kingdom Gambling Commission.

Andrew Green’s dream-turned-nightmare began in January 2018. A regular player at the Betfred casino, Andrew Green was playing the famous slot Frankie Dettori’s Magic Seven blackjack game, as created by Playtech. This slot has a massive jackpot, and to his amazement, Mr Green landed the current jackpot of £1,722,500.

To make sure of his win, Andrew Green phone Betfred themselves, who did confirm that he had won the jackpot amount. They congratulated him and said that he would receive the life-changing amount within a few days. They even went as far as saying that Mr Green should open ‘several bank accounts’ to spread his new-found wealth around.

And so, Andrew Green spent five days in cloud cuckoo land, wondering how to cope with a new life as a millionaire. At no stage did Betfred even suggest that there might be a problem with him receiving his jackpot amount … and then it all came crashing down.

Betfred was keen to pay out for five days … and then had a change of heart.

On day five, Andrew Green received a phone call from someone at Betfred. He expected to hear news of how his winnings would be paid. Instead, he heard the news that his winnings would not be paid at all. Betfred said that the game had suffered a ‘software glitch’ and that the jackpot should not have been triggered and as a result, Andrew Green had not won £1,722,500.

And then the weirdness started …

Despite now not owing him any money, Betfred offered Mr Green a ‘hard luck’ payment of £30,000 … with a caveat that Andrew Green would sign an agreement that meant he could not legally discuss the incident with anyone. When Mr Green refused, Betfred doubled their offer to £60,000. Mr Green refused again and decided to enlist the help of the legal profession. Already ten months had passed since Mr Green’s good fortune had turned sour.

First of all, Mr Green’s legal team asked for evidence of the software glitch which Betfred claimed prevented Mr Green’s win from being a legitimate one. Betfred said they could not provide the evidence as Playtech held the evidence, the creators of the Blackjack game via which Andrew Green had won the jackpot. Playtech refused to release evidence of the glitch, saying it was ‘too confidential’.

Lawyers representing Andrew Green took the case to the highest court in the UK.

Mr Green’s legal team eventually took the matter to the UK’s high court, suing Betfred and its parent company Petre (based in Gibraltar) for £2 million. This includes interest and the money Mr Green spent in place of his win.

The defence team for Betfred did eventually outline the nature of the ‘glitch’. Due to a software bug during the blackjack-based game more ‘special’ cards were added to the pack that made it easier to win the jackpot, especially during an extended playing session. One curious claim or factor was that the more the game was played, the more special cards were added, making the top prize even easier to win. If Andrew Green had continued to play following his £1.7 million wins, he could have won £500 million or amounts even greater than that.

Software creators Playtech have remained uncooperative throughout the whole affair.

Despite these ‘glitch’ claims, Betfred has been unable to prove that the glitch even occurred, because of Playtech’s lack of co-operation. Playtech has remained tight-lipped about their involvement in the situation – obviously if they provided evidence that they’d allowed a glitched game out into the casino market, and one that could cost one of their clients over £2 million, then their reputation would be harmed.

Unfortunately for Mr Green, the terms and conditions for Betfred (which he automatically agreed to when he became a member of the site) include the standard ‘software malfunction voids all winnings’ clause. His case hinges on whether Betfred can prove a software malfunction instead of – as they are currently doing – claiming that one happened.

Betfred’s case hangs on whether the high court judge accepts their explanation that a glitch occurred, but as the software had been created by a different company (Playtech), they are unable to prove that it did occur.

A decision is likely due in early November.